Ventnor Plaza on the move for improvements soon. 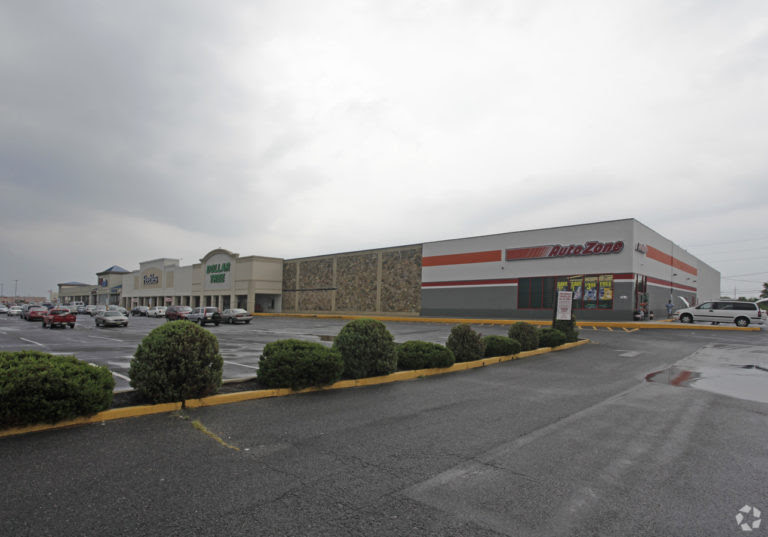 – With one investor on the line and other national companies waiting in the wings, adaptive reuse of a portion of the Ventnor Plaza shopping center could happen soon. The Board of Commissioners Oct. 24 introduced an ordinance adopting a redevelopment plan, which would provide financial incentives that could attract additional investors.
At their meeting Thursday, the board heard a presentation  from representatives of LaMar Companies of Fairfield, an investment company that purchases underperforming retail shopping centers and manages them. LaMar owns the shopping center and leases it to private businesses.
“Everyone knows retail malls are not doing well. The market has changed through Amazon internet sales,” LaMar attorney Nick Talavecchia said. “It was thriving at one time, but it’s not thriving anymore. Forty-five percent of it is vacant.”
According to Talavecchia, the company hopes to redevelop the shopping center in several phases, with the first phase being an indoor storage facility.
“The redevelopment plan will expand uses, look at realistic parking requirements, require upgrades over time,” Talavecchia said. “We think our plan protects the interest of Ventnor.” 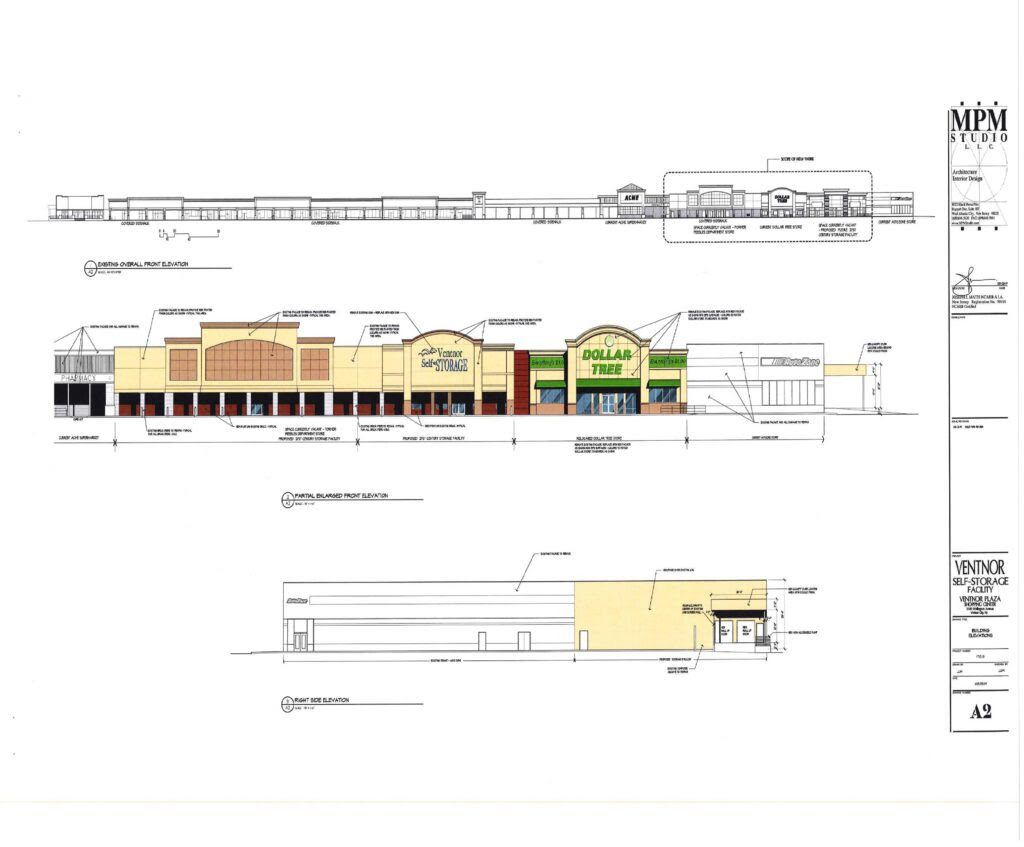 At least four phases are planned that will make the site more functional, including upgrading driveways leading into the shopping center, he said.
Talavecchia said in the first phase, the company would reconfigure a section of the mall that is currently unoccupied and relocate an existing business to make the storage facility space larger.
Trying to find additional tenants is challenging, according to LaMar asset manager and principal Ralph Pugliano.
“Ventnor has a very big center and trying to find tenants of this size is difficult,” Pugliano said.
Self-storage is feasible for Ventnor’s transient population, he said.
“All our numbers tell us this is a use that we think would be supported by the area,” he said.
Pugliano said the company is talking with prospective tenants every day that may be interested in locating on pad sites, including Wawa, 5 Guy Burgers and Carvel. Any change will help bring in smaller tenants, he said. Phase I Ventnor Plaza Redevelopment Plan
The Auto Zone will stay where it is, but the Dollar Tree store will be relocated, and that space combined with a vacant storefront to create a consolidated area for the storage facility.
The schematic, prepared by Arthur Ponzio, includes several variations that could be completed in phases. Initially, the company plans to install some landscaping along Wellington Avenue. Upgrades to driveways at Little Rock Avenue and next to the adjacent Dollar General will happen over time, he said.
The redevelopment plan shows that Ventnor is business friendly, Talavecchia said.
The redevelopment plan creates an opportunity for things to happen on that site, although there are no guarantees, Commissioner Lance Landgraf said.
“There is no self-storage on the island,” Landgraf said.
“LaMar owns a lot of real estate and they know what they are doing…and they know who to talk to,” Talavecchia said.
Commissioner Tim Kriebel called the site “underutilized.”
“In my mind I pictured a mini-golf course out there, to create opportunities for infill. But a convenience store with gas would be a homerun,” he said.
Landgraf said approving the redevelopment plan with financial incentives would help attract additional tenants.
“That helps them have surplus so they can bring in more people at a lower rent intitially,” he said.
Each additional phase, which would be subject to site plan reviews, would add landscaping elements and upgrade stormwater management systems and driveways, Talavecchia said.
The parking lot at the shopping center often floods during extreme high tides, but there’s nothing that can be done about that, Talavecchia said.
Planner James M. Rutala of Rutala Associates of Linwood created the redevelopment plan for the Ventnor gateway property, which currently houses an Acme Market, liquor store, U.S. Post Office, gym, Dollar Tree and Auto Zone.
According to Rutala, the city’s Master Plan of 2016 highlighted the need to re-energize the area. 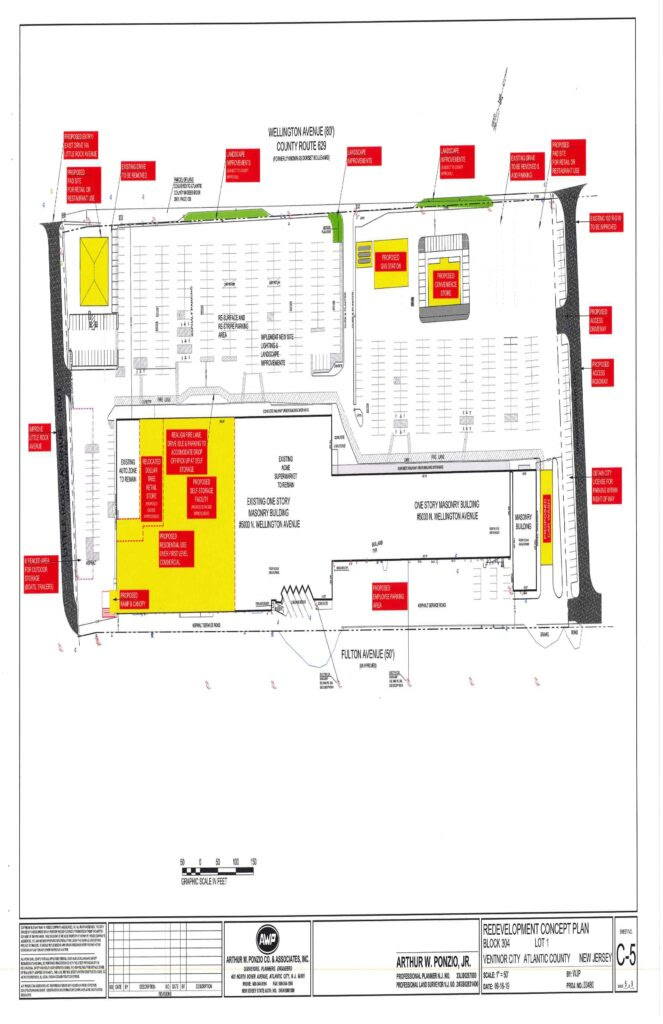 A later phase
A final phase could include residential development above non-residential uses, the plan states.
“The plan will provide opportunities for expansion, better site circulation, improvements to parking, landscaping, signage and lighting, as well as introduce new uses such as residential uses and self-storage facilities to the site,” the report states.
Once the 10-year plan is adopted, Talavecchia said any planned improvements would need to be reviewed by the Planning Board.
The ordinance also requires that the governing body, which serves as the city’s Redevelopment Authority, shall enter into a formal agreement with the redeveloper, outlining any cost-sharing, performance guarantees and tax incentives, which could be in the form of payments in lieu of taxes.
The redeveloper will be responsible for putting funds into escrow to pay any professional fees and expenses incurred in preparing documents and agreements.
A public hearing on the redevelopment plan ordinance will be held 5:30 p.m. Thursday, Nov. 14. 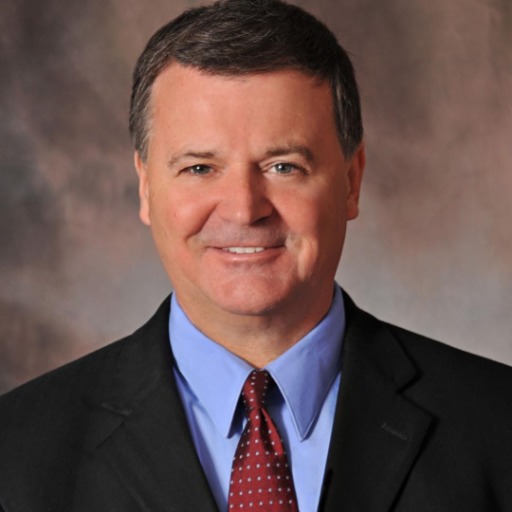 Licensed since 18 years young, and a broker honors in NJ since his early 20`s, Gary has now, over 44 years experience, diversified in all aspects in real estate, including owning two offices and ma....

Somers Point, NJ--Known for its annual popular Bayfest in the spring season,(which is cancelled this year because of public safety concerns of the corona virus pandemic),

This info out today may help millions have less stress!. Check it out. IMPORTANT SAFETY NET: . Also mentions late payments, credit forebearance, etc Up to 12 months of forbearance.Waiving of

The Federal Reserve made an emergency announcement Sunday afternoon by announcing that it would be cutting interest rates to zero for the first time since the financial crisis. This is to align

Welcome-Search All Properties By All Brokers Here

Should you require assistance in navigating our website or searching for real estate, please contact our offices at 609-338-1339.

The data relating to real estate for sale on this web site comes from the participating brokers of the South Jersey Shore MLS. Any use of search facilities of data on the site, other than a consumer looking to purchase real estate, is prohibited. Information displayed on this web site is Deemed Reliable But Not Guaranteed. This data is updated daily.

By registering, you agree to our terms of use and that real estate professionals and lenders may call/text you about your inquiry, which may involve use of automated means and prerecorded/artificial voices. You don't need to consent as a condition of buying any property, goods or services. Messages/data rates may apply.